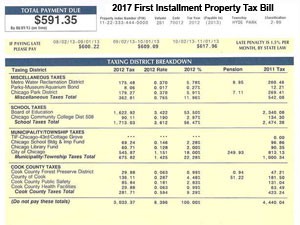 As we all await the dreaded second installment of our 2017 property tax bills, two concerns arise for what we’ll find in our mailbox:

Here’s what’s going on and what you can do about it for relief.

Every year in Cook County, you get two installments of your property tax bill. The first is due at the beginning of March and is always 55% of what you paid last year. No exceptions.

Your second installment bill usually arrives in July and is where you feel the increase: and increases are far more common than decreases. This is why there was so much outrage in July 2016 as the first portion of Mayor Emanuel’s $588 million tax hikes were felt. Even more will be applied to 2017 second installments, and many are in for a rude awakening.

To make matters worse, there are fewer taxpayers to pay Cook County and City of Chicago taxes. In fact, Cook County had the largest population decline of 21,324 people from July 1, 2015 to July 1, 2016 of any county in the nation, according to the US Census Bureau. This is just shy of 300% more than the county with the second highest exodus of 7,696: Wayne County, Michigan, which includes Detroit.

This means that each remaining taxpayer has to make up a portion of what those who have left would’ve paid. It’s hard to tell how much this equates to, but you can be sure that it will put upward pressure on what those who stay have to pay.

The only way to reduce your property taxes is to appeal them. Doing so helps guarantee that you are only paying your fair share, and not a penny more. Because assessed values are automatically calculated, there are often mistakes and they simply cannot take all market dynamics and changes to your home into account. Only a property tax appeal will do so, and it all starts with a free property tax appeal estimate from Kensington. Don’t miss your chance: many townships in Cook County are now closed for appeal for 2017 even though we’re only in May – see the 2017 Cook County property tax appeal calendar here.